For the first time in the history of the Prémio Abertura Award, ESOP has nominated an international entity for the Opening Prize, the National Civil Identification and Authentication System of Cape Verde (SNIAC) which was nominated together with Imprensa Nacional – Casa da Moeda, SA (INCM), for the project implemented by Caixa Mágica Software “Middleware for the use of electronic documents of Cape Verde”.

Also for the first time, there are two ESOP associates involved in an Opening Award nomination, an associated company and an institutional associate.

Through this software, citizens of Cape Verde can take advantage of the digital features of their National Identification Card, thus becoming holders of an identification document with the most advanced functions in the electronic component.

The microchip, an integral part of the National Identification Card, stores information that enables the establishment of processes, based on strong digital cryptography, which uniquely and extremely securely authenticate each citizen. The software manages all interactions between the card, citizens, professional users of state bodies and central information storage and processing systems. The entire process of activating and editing citizens' data will be possible through the use of middleware software, which is also the tool used to change personal data, addresses and, not least, for electronic signature of documents and digital authentication. 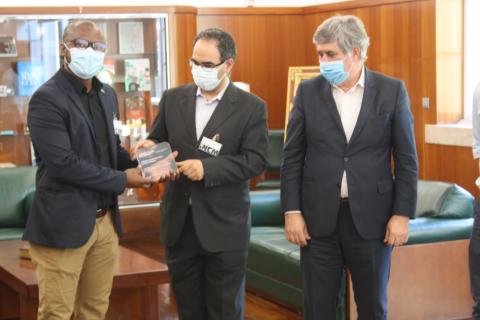 ESOP had the opportunity to announce the Prémio Abertura Award at an online meeting with the participation of representatives from various entities: SNIAC, INCM, ESOP and Caixa Mágica Software. Later, with SNIAC's visit to Portugal, it was possible to present the award trophy in person, at the INCM headquarters.

According to the President of SNIAC, Eng.º Juvenal Pereira, "Open Source is the way. We are aware of its advantages and potential, for this reason, since the first time the choice fell on Open Source." advantages of using this solution such as "the compatibility of the solution itself, for ensuring greater interoperability with other solutions and applications, for facilitating access to code that allows, for example, easier customization, but also for having a fair and lower cost than the cost of proprietary solutions”.

The President of SNIAC, Eng.º Juvenal Pereira also took the opportunity to thank INCM for the partnership, Caixa Mágica for developing the solution, and ESOP for the recognition.

The Board of ESOP thanked SNIAC / INCM for the decision to adopt Open Source technologies and hoped that the Open Source Community of Cape Verde is strengthened by this choice and that this recognition will enhance the creation of synergies between the Communities and Open Source Companies from both countries.

The ESOP Board also thanked the INCM for its commitment to boosting the use of Open Source technologies within the Public Administration.

The presentation of the Abertura 2021 Award took place at Open Source Lisbon, on the 18th of June in an online event. In addition to SNIAC / INCM, it also received an Honorable Mention to ANPRI and the winner of the Award was Águas do Norte, SA,.